From Lake Erie, the Federal Commissioners for Sandusky Conference report that western Indians have refused to make peace. Did not receive chance to meet with them, except for the deputation at Niagara. Waited at Detroit River. On 29 July 1793 Captain Elliott came with another deputation of Indians, headed by Packonchelas, Head Warrior of Delawares, Kakiapalathy, Head Warrior of Shawanese, and Sawaghdawank, Headman of Wyandots. They asked if commissioners had authority regarding the fixing of the Ohio River boundary line between whites and Indians. The commissioners answered in the affirmative, and explained why United States could not make the Ohio River the boundary. Commissioners related the prospect of concessions and annual compensations. There was as error in communication regarding whether the commissioners should stay or go home, which was cleared up. By 8 Aug, prospects for peace looked favorable. Six Nations, Captain Brant and Mohawks held fast together wishing for peace. Less in favor of peace were Wyandots, Delawares, Shawanese and Miamis. With no answer by 12 August, commissioners proposed to go to Miami bay or mouth of Miami River, which was refused. Commissioners then sent notice demanding decisive answer on whether treaty was to be held or not. Reply was in the negative, so the commissioners embarked and sailed for Ft Erie.
Six Nations indicated they knew nothing of this answer. Commissioners gave assurance of the strong friendship between Six Nations and United States. Chiefs of Six Nations wanted commissioners to stay at Buffalo Creek. Commissioners directed them to meet with General Chapin instead. Commissioners then go on to explain the transmittal of correspondence to Major General Wayne explaining the break down of the talks. They arrived at Fort Erie on 23 August, having prepared correspondence on the voyage.
Estimated numbers at council at Miami Rapids: from the British agents fifteen hundred; Federal Commissioners estimate less. 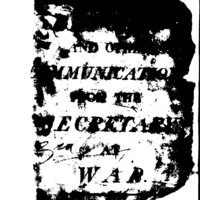 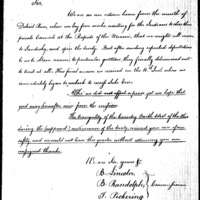 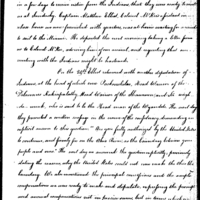 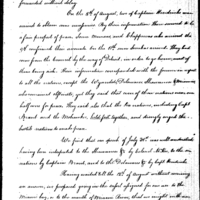 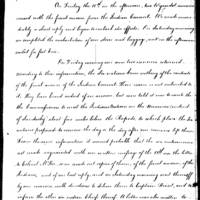 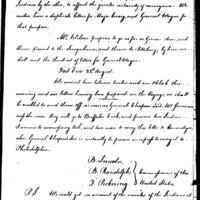