Certification of payment; Corps of Artillerists and Engineers stationed at West Point

Simmons certifies payment of $2336 to Corps of Artillerists and Engineers stationed at West Point, New York pay and forage month of May 1796 to be transmitted to Nicholas Fish and then to George Fleming. 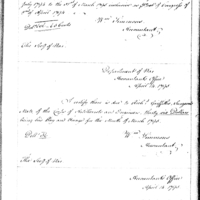 to which said receipt is to be [indecipherable] agreeably to the Communication of the Comptroller.
[indecipherable) Wm Simmons
The Secretary of War

I certify that there is due to Nicholas Francis Martinon the Sum of One Thousand two hundred forty seven dollars and ninety nine cents being the balance of his Account for their Compensation and personal Expenses as Temporary Engineer for the fortification in the State of North Carolina from the [??] of April 1794 (the date of his appointment) to the 23rd April 1796 (the day he received the letter from the Secretary of War notifying him of his Discharge) and for mathematical [indecipherable] postage of letters and for his passage from [indecipherable] to [indecipherable] and [indecipherable] hire to assist him in his surveys

I certify that there is due to the Corps of Artillerists and Engineers stationed at West Point the sum of Two Thousand three hundred and thirty six Dollars for their pay and forage for the Month of May 1796 which [???] is to be transmitted to Nicholas Fish Esq and by him to George Flemming Esq at West Point who is to be accountable for the [?] application there of . 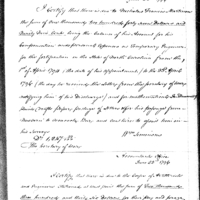