Notification that he will receive his pay and subsistence money from Jonathan Jackson, federal supervisor of Massachusetts. 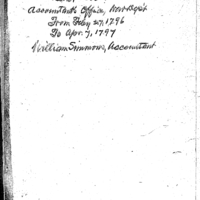 Captain Richard H. Geaton Accountant's Office
Boston Oct. 26, 1796
Sir,
I received your letter of the 15th [sic] your account for pay of subsistence for September 1796 which has been exaniated amount to fifty three Dollars &amp; 50/100, which sum you will receive from Jonathan [illegible] of Massachusetts on [illegible] on giving [illegiblele]dificiate of receipts for the same.
As respects your allowance of wood, it is not settled at this office.


Jonathan Jackson Accountant's Office
[illegible] Boston Oct. 26th 1796
Sir
The [illegible] of the United States will [illegible] you the [illegible] of fifty five Dollars &amp; fifty cents which you will have to pay to Capt. Richard H. Geaton in Boston [illegible] for his pay of subsistence for September 1796 of take his duplicated receipts for the same.


Lieut. Accountant's Office
[illegible] Day Mast. West Point Oct. 29th 1796
Sir
I received your letter of the [illegible] enclosing one to you from Capt. Staut Morris on the subject of my disallowing ten Dollars of his account charged for his expenses while remaining in New York for the money of the Captin
Layout
Sort
Filter 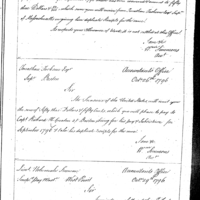