Table of supporting documents for claims of refugees from Canada. 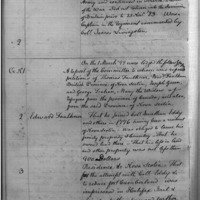 Possibly enclosed in McHenry to Wolcott 1800/04/15
Odd and even pages are paired, taken from a book. Some sentences cross the line from odd image (left page) to even image (right page).

Year surmised based on collection

Marks of the papers | Names of Claimants | What for &amp;c
F No 1 | Abraham Livingston lodged 14 Febr 99 by Mr Glen | Having been a resident of Canada Was Clerk to Messrs Oakes &amp; Ernentger in the Indian or furr trade untill the sd Province was invaded by the American Army in 1775, when he joined the said Army and continued in service to te end of the War Did not return into the Dominion of Britain prior to 25 Novr '83 Was a captain in the regiment commanded by Colo James Livingston
" 2 | |
G No 1| | On the 1 March '99 were lodged the followg [undecipherable] per A report of the Committee to whom was referrd petitions of Thomas Faulkner, Edwd Faulkner British Province of Nova Scotia; Joseph Green, and George Trahan, Mary the Widow of refugees from the province of Canada; and also, from the said Province of Nova Scotia
2 | Edward Faulkner | That he joined Coll. Jonathan Eddy and others in 1776 having been a resident of Nova Scotia--Was obliged to leave his family property &amp; country -- That he owned land there -- That his loss in land and other property was not less than 900 Dollars
3 | | Residence &amp;c Nova Scotia -- That for the attempt with Coll. Eddy &amp;c to reduce fort Cumberland was imprisoned in Halifax Jail &amp;
4 | | Similar to the above and further that said Edwd Faulkner took up arms to assist in the defence of the town of Machias Maine against troops &amp; shipping from Halifax Proofs offered
Before John Taylor Esqr first Judge of the Court of C. Pleas for the County of Albany the 2d Feby 1799
Deposition of Jane Vander Heyden a person will known to the Judge and worthy of Credit
Ditto as Ditto nearly to the same purpose Deposition of Jas Robichawe
The report of the Secretary of War, on the and Simon Chester, refugees from the Presque Trepagne, Augustine Trepagne, Francois Des Jardins, &amp; Francois Rabutaille, on the Petition of William Lawrence,
Before George Leonard First Justice of the Court of Common Pleas in the County of Bristol Massachusetts 9 Novr '98 Deposition of Thos Faulkner
Deposition of John Peck on the third Monday of Decr '95 in open Court County of Providence Rhode Island
Deposition of Willm Maxwell in open Court same time &amp; place with the above 35}
Marks of the papers | Names of Claimants |
R | Lieut. Colonel I. F. Hamtramck | Received a letter wherein he says that, had heard of the act in the hopes it is not too late in 1776 and served line of New York as
S No 1 | James Livingston | Received a letter from Major Inclosing a letr to him from Coll. his claim and that of his Father "his family were great sufferers withes all proper favour may
" 2 | | Letter of Jas Livingston to the
" 3 | John Livingston | Account of losses sustained by --- 600 acres of land valued at Sworn to before the Chief Justice
" 4 | James Livingston | A Deposition of the same date Van der Heyden of the City of Livingston in Canada That he of considerable property and [sustained?] the American cause And that except when the service of the United from him dated Pittsburg 18 Septr 1799
"but a few days ago," he
favour of Canada refugees--
to inform, that he left Canada
the whole of the War, in the
a Captain


General Hamilton dated 31 Octr, 1799
James Livingston with papers respecting
The General says "That he knew
under meritorious circumstances and
be shewn in the case"
General to the above purpose
Mr. John Livingston late of Canada
2 Dollars per 1,200 Dollars
of the State of New York the 24 October 1799 by
Jacob Vander Heyden
Jas. Livingston
and before the same Judge by Jacob
Albany Mercht. That he knew James
was in the Mercantile line was possessed
great losses by reason of his attachment to
since then he resided in the State of New York
States required his attendance elsewhere.