Account for payment to Robert Wilson for service as an Indian interpreter and traveling with Indians. 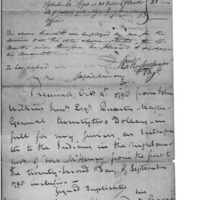 To services as an Indian Interpreter at Fort Washington and for coming from White River with a party of Indians 50 Dollars
To Cash paid for Subsistence for Indians at Fort Hamilton as per Certificate 12.75
See page 204 62 Dollars