Certificate for Payment to Hugh McAlister

Certificate for Payment to Hugh McAlister 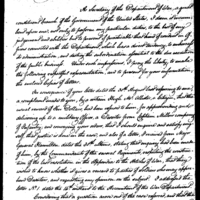 Barracks at Carlisle
This is to certify that on the evening of the 28th of November 1798 Mr Hugh McAlister did deliver to me at the Barracks, a Deserter from Capt Miller's Company, named David Gill about five feet seven inches in heighth, eighteen years of Age fair hair and complexion, grey eyes.
/signed/ Callender Irvine Captn 2nd Regimt Arts &amp; Engrs
I do certify that the above described Deserter which proves to be David Gill of Capt Millers Company of Infantry was tried at Reading and found guilty of Desertion.
/signed/ Francis Gibson Lieut: 2nd Ret Artillerists &amp; Engineers