Extract from General Orders issued at Headquarters relating to complains about late pay. 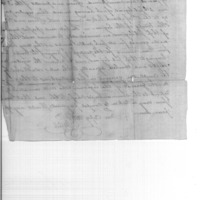 Copy of a General order of the 20 Sept. 1793 Extract from General Orders "Headquarters Hobsons choice
September 20. 1793
Complaints being lodged with the commander in chief by several non-commissioned officers and privates of the 3rd and 4th sub-legions, of not having received their regular pay up to the 1st of March last, in common with officers and [the?] other troops of the Legion. The late and present paymaster of those sub Legions, are immediately to account with the [pay?] master general for all such public monies as they have have from time, received for the purpose of paying the troops [undecipherable]&#160;:longing to those sub-Legions, and to produce the regular receipts and vouchers, agreeably to the rules established by the comptroller general in his instructions to the paymaster General of the Legion, who will immediately report to the command in chief, to the end that measures may be taken to compel payment, should any appear due.
True copy attest C: Swan