Refers to letters received concerning Indian affairs in local area. Reports problems with the Cherokees stealing horses. Henley wrote to the Cherokees in warm, anxious, friendly terms, hoping that the agent there will clear up any problems. Refers to the affairs of Europe. 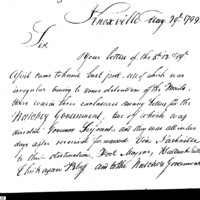 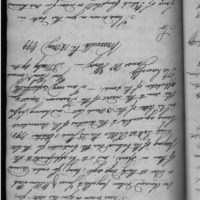 Your letters of the 5th 12th 19th April came to hand last post, all of which was irregular owing to some delention of the mail, there was in their enclosures many letters for the Nalchey Government, two of which was directed Governor Serjeant, and they was all in two days after received forwarded via Nashville to their destination Fort Massae, Wallnah hills, Chickasaw Bluff and to the Natchez Government

As far as the letters point Your instructions to me, I shall particularly attend to them and observe that they meek with due regard in all instances Monday the 27th Instant and Express from General Wilkinson as I was going to Tellico with a letter for you which I know forward as well as one from Mr Hockey.

All seems to be well in this quarter, excepting the Indians -The Cherokees have been more mischivous in Stealing Horses to restrain which I have sent an express unto the nation. And wrote to them in warm, anxious, but friendly terms, Expressive of the dissapprobation of the Government - Against such evil conduct I impute their excess of theft these some mouths to the absence of an agent amongst them, whose presence I am Confident was a check - upon their misconduct

As the Affairs of Europe appear to me to be rising to the highest importance, And in which this country may be involvede. I shall detain the Express from General Wilkinson tite the arrival of next Saturdays Mail - as possibly there may be some orders to him from the Executive I am wt Respect Hb David Henley Agent of War