Indian Affairs in the Country near Natchez

Indian Affairs in the Country near Natchez

Captain Guion declares that the Indians still appear pacific though constantly urged to the contrary by the Spanish. Many of the principal men [chiefs] have visited Natchez and declared their friendly disposition and their determination to discount the talks given them by the Spaniards. Some of the Six Town Choctaws and a tribe called the Huwanies are allied with the Spanish and may be troublesome to the party working on the boundary lines. 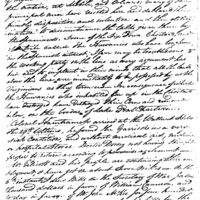