Spanish Have Evacuated Their Posts, Etc.

Spanish Have Evacuated Their Posts, Etc.

Among other matters, Captain Guion announces that the Spanish troops have evacuated their posts at Walnut Hills and Natchez. The buildings and posts were left in the same state as when they were occupied by His Majesty's troops. American troops are much in want of clothing and medical supplies. The Indians also want to know when supplies will be sent to them. 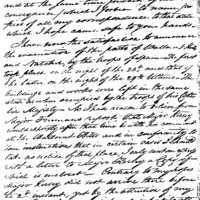