James McHenry informs Capt. Isaac Guion of the situation on the border with British Canada, and opines on a rumored British invasion of points south. Advises that the relationship with the Spanish in the U.S.-Spanish Florida border region is tenuous, but enjoins Guion to avoid offending the Spanish while keeping his detachment in full preparedness. Directs Guion to keep Indians in check and to prevent Spanish officers from visiting his posts. Expresses confidence in the bearer, Capt. Nasworthy Hunter, who has been appointed Inspector of the Public Stores and Buildings in the Posts East of the Mississippi. 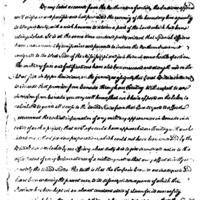 By my latest accounts from the Northwestern frontier
permit the opening of the boundary line
retain a part of the land which had been relinquished
at the same time rendered pretty evident that Spanish Officers have endeavored by emissaries and presents to induce the Northern Indians to emigrate
The military force and fortifications have also been increased and strengthened on the West side, in upper Louisiana on the ground as assigned, that Great Britain intended to invade that province from Canada through our territory
with respect to invasion from Canada
concealed by the British nor overlooked by our officers, whose duty it is to give immediate notice to this department of every circumstance
the troops in Canada are inadequate
these circumstances, should they have refused to evacuate the posts, after receiving your communications, will render it necessary that you should pay the strictest attention to your instructions that you should render your situation a strong as possible by your works and defences
that your posts be so distant from theirs as to prevent all intercourse between the soldiers of the respective garrisons, and preclude the probability of the idea of their being erected to insult or annoy them
It will be proper not to refuse visits from the Spanish officers
upon no account to leave your garrison