Statement on Service in the Revolutionary War

Statement on Service in the Revolutionary War

Statement regarding the Revolutionary War service of Captain Samuel Treat of the Artillery. 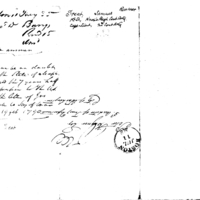 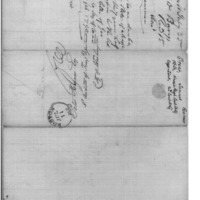 Boston 11 July 35
Edwd D Bangs
Recd 15
Andd
No answer
"There can be no doubt
that the state of Mass
charged the 7 years half
pay pention to the U.S.
See letter of Jos
Hanna to Secy of War
dated 19 Feby 1790
Treat
Rev. War
Treat, Samuel
[undecipherable] Lt., Knox'sRegt. Cont. Arty
Capt.-Lieut., 2dCont. Arty
Boston Jul 11 M8 free
Peter Hagner Esq.
3d Auditor of Treasy Department
City of Washington
Boston Sec Office July 11, 1835
Sir -
In answer to your inquiring respecting Capt. Samuel Treat of the Artillery in the War of the Revolution. I have the honor to make the following statement.
On an Army Book stating curtain accounts of the officers of the Revolutionary Army there is an account of Samuel Treat late a Lieutenant in Knox's Artillery where his half-pay is made up for seven years and amounting to [currency symbol] 504. and at the bottom of the account is this Memorandum - "this man not to be certified till it appearing he left wife or children" A faithful and particular search has been made through the records of the Council until 1797 and no evidence found that the half-pay was ever paid to any person.
Your's very respectfully
Edward A Bangs [undecipherable]