Outlines the procedures for Mr. Greenfield to settle the matter of the two cattle which were taken for the use of the public in 1777. 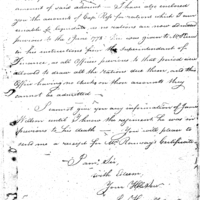 I received your two Letters dated the 7th Inst. by Mr. Huchings I had forgot to metnion the Receipt of Mr. Greenfields Letter &c as also of one from Colonel L. Bayard at Fort Pitt in answer to yours of the 29th of February last sent by Lieut. Schuyler respecting his accounts - this Greenfieilds. I laid aside expecting nothing could be done with them untill 164.

untill your return - the accounts of Greenfield, I have now laid before the Clerks of accounts and they say that Broadfield must make an assignment or give a power to Mr. Greenfield to settle the debt for him and further that a Certificate from the Commissary or Officer who received the two Cattle of Mr. Broadfield setting forth that they were taken for the use of the Public and that he has had no Compensation made for them, will be necessary to support and make good the claim -

I am Dr Sr [dear sir] Yours